Litter Critters: Introduction to the Opilionids 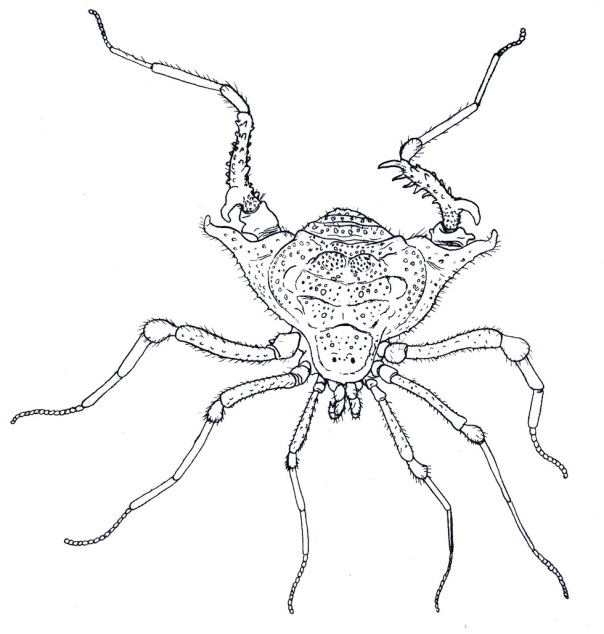 Illustration and text by Brittany Benson

Opilio is Latin for shepherd.  In some places, shepherds walk on stilts to make an easier time of counting their flocks, so, it was only sensible to give this name to these arachnids.  How long have they  been around?  We have fossils of harvestmen, not much different from those we find today, from about 400 million years ago (Devonian), though they are probably much older.

One can tell what type of environment an opilionid is from without having to have seen in it’s home.  Leg length is a very helpful clue – the “typical” daddy-long-legs that most will think of – that is, small body, long legs, will live in places with access to large spaces, and can cover a lot of ground walking in the short grass or over rocks and stumps.  Shorter legged species will hang out more in the loose leaf litter and under logs, while the tiny, short legged, often flat-bodied ones will live in the deeper, smaller spaces of litter and in crevices.

Harvestmen are found on all continents save for Antarctica, though they are most diverse in the tropics, especially in humid forests.  They’re also found in a variety of environments – not just the leaf litter and soil.  They have some crazy diversity in morphological features, and, in some, striking coloration.

Mostly omnivores, they feed on small, soft-bodied invertebrates, dead things, plants, and fungi.   They are the vultures of the arachnid world.

Most reproduce sexually, but several reproduce parthenogenetically.  Courtship behavior of the males, if present, is typically brief and tactile, unlike the elaborate rituals of many spiders, who have to worry about a hungry female.  Some harvestmen will even have paternal care of the young, making Opiliones the only known order to exhibit paternal care (though maternal care is quite common).  Opilionids have a couple of nifty defenses. One is that they can secrete a smelly liquid from the base of the second pair of legs, and the other is that if a predator (or curious child) has a hold of a leg, they can detach the leg and scurry away, leaving the leg grabber with nothing but a twitching leg in their grasp.

-Evidence of past segmentation on opisthosoma (in most).

One Comment on “Litter Critters: Introduction to the Opilionids”