Politics is the art of the possible.

Laws are like sausages, it is better not to see them being made.

I’ve known both quotes for a while, but as I just now looked them up, I discovered they have the same source, Otto Von Bismarck, Chancellor of the German Empire, 1871-1890.

I’ve been thinking a lot about politics these days. I recognize my political skills can best quantified with a negative (or imaginary) number. I also think that academics are often charmingly naive about what it takes to make and pass policy, or, at its most basic, convince people of something that they are predisposed to disbelieve.

Last night I was going through the big stack of magazines that accumulated while Debby and I were on sabbatical in Copenhagen. I came across an amazingly concise primer on what it takes to run for office, by Michael Ignatieff, in a recent New Republic . By all means, go read it. I have shamelessly quoted some of his elegant turns of phrase (e.g., “you’re right to get a hearing as the person you are”). But it is better in the original.

None-the-less, here are the lessons I learned, digested and modified by an ecologists intellectual microbiome.

So next time you are talking to a politician, of whatever stripe, note that they have a skill set, and a constitution, likely very different from your own. At the same time, if you want to get something done, in a committee, in a faculty meeting, at the city council, bear in mind Ignatieff’s wise council on the relative importance of facts vs standing, and growing a thick skin. And recall the nickname of one of the more influential legislators of the past century: Hubert Humphrey, the happy warrior. 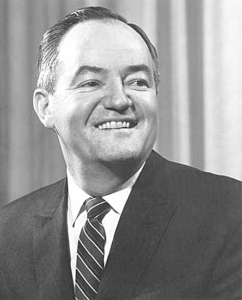 ← Marty’s World: We’re off to see Ed Wilson!
Spring in Oklahoma–Hiking along the South Canadian River →